The first few times we went, the impression was not good. Maybe it had to do with the crazy butcher knife wielding owner who went around threatening people with it to make them say loving things to their parents or partners which I didn’t feel particularly comfortable with. I could hardly enjoy my meal for fear of that guy coming to our table.

So for a few years we didn’t go. And recently we went to the one on Macleod trail before I came here to this location in Dalhousie. The Dalhousie location seems a little sub-par compared to places like Sakana, but I don’t judge a place solely on how it looks. After all, it is a restaurant and if the food cannot speak for itself, there’s no point in going.

The last time I went with my cousins/the part of the wedding party it was pretty good. Especially since we didn’t have a crazy guy with a knife coming at us. The only thing was they had to be prompted to bring us our pocky at the end of the meal.

Today, I went with my sister and we decided to try some of the menu items we hadn’t tried the last time we’d been there (excluding the staples like salmon sashimi for her and scallop nigiri). In addition to those two things, we ordered the ginger shrimp, tuna combo, grilled BBQ eel, Vegas roll, and Ikayaki tempura. Like many places now, Kinjo gives a complementary assortment of rolls to promote some of the rolls on their menu. The assortment this time included the volcano roll, hot California roll, spicy salmon roll, and some roll with squid legs in it. The “hot” was not referring to spiciness, rather it was referring to temperature and I was a little disappointed because I find that having  a bit of spice makes sushi more appetizing (I mean with all that rice!). The first to come was the Ginger Shrimp. Though it was good, it was disappointing because it, in fact, was not ginger, but sweet chili sauce. We demolished that one pretty quick. It was after all,  was an appetizer and had only four shrimps. Next came the salmon sashimi, scallop nigiri, and tuna combo plate. Those were Val’s and I had no desire to try them…well not really. She did encourage me to try one of the pieces of tuna sushi from the combo plate. It didn’t taste all that spectacular to me, but then again I’m not a raw fish connaisseur like she is when it comes to these things. Though it was good, Val said that she was disappointed that they had run out of two of the items that were supposed to be included on the combo platter and had to substitute them for one of the other items. After that came the grilled eel and Ikayaki tempura. The grilled eel is substantially smaller than what I’m used to buying at T&T, but I know I shouldn’t compare to that. The grilled eel practically melted in your mouth. It was so tender that it was nearly impossible to pick up large sections with your chopsticks without dropping at least a small bit of it. The Ikayaki tempura was a change from our usual calamari. Although both dishes are made from squid, ikayaki refers to squid that had been grilled. In this case since it was an ikayaki tempura, it was grilled then battered with tempura batter and deep fried giving it a unique taste as opposed to calamari which is squid that is simply battered and fried. Both are good, but I still prefer calamari over ikayaki.  Ironically, the first dish we decided on was the last dish to arrive. The Vegas Roll was one decided with apprehension, but also intrepidation. The part I was most concerned about was the fact that it contained cream cheese, which I don’t like in my sushi (I’m sorry, in my mind cream cheese doesn’t go with rice and seaweed). And I’ve always had a thing for mixing sweet with savoury. Obviously there’s a limit, but a slice of fruit or a sweet mango sauce on my sushi is not unheard of. For the first few pieces of sushi, the cream cheese was small enough to be undetectable, but I was unlucky enough to get a giant chunk in the last one and it kind of ruined it for me. The piece of sushi was so big I couldn’t fit it all in my mouth. I first had to break it into two sections and it took a couple bites to eat all of it. Surprisingly, despite having to take several bites, the pieces held together quite well.

Overall I was pretty impressed. Since the knife wielding psycho was no longer around, eating here has become so much less stressful. And eating should never be stressful. Based on my experience today I’d rate it 3.2/5. 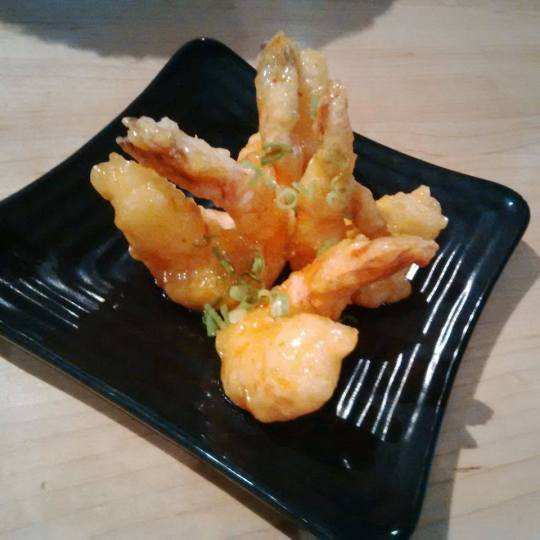 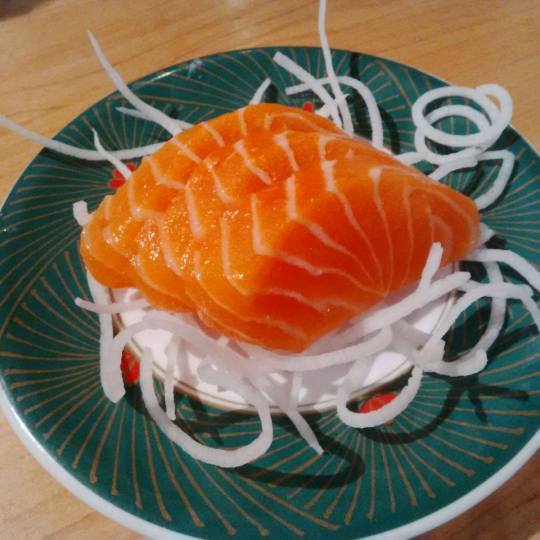 One of Two Salmon Sashimi 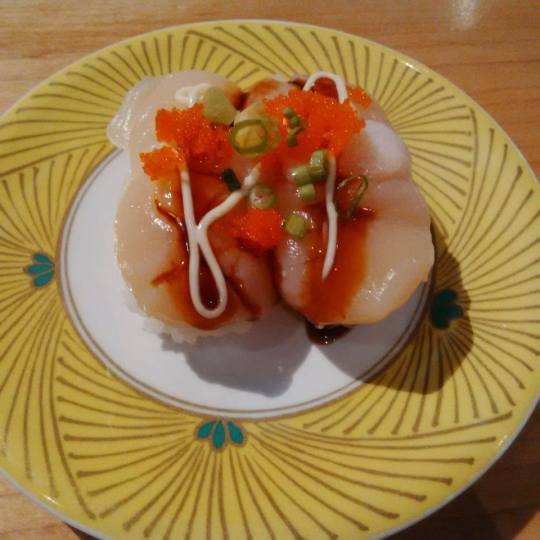 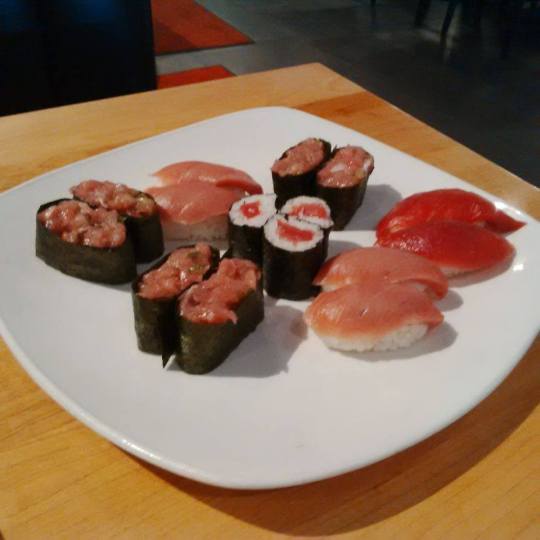 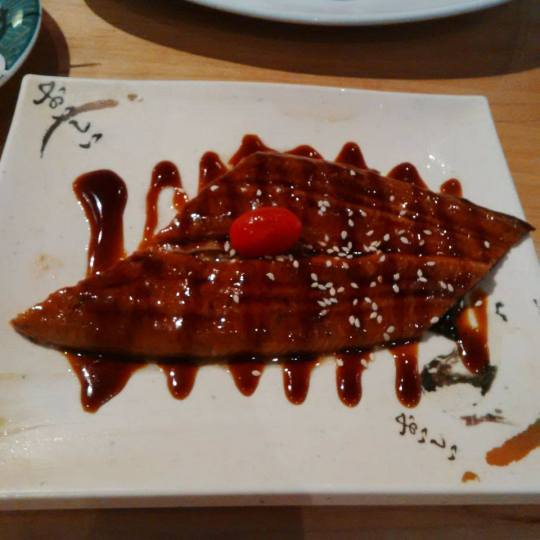 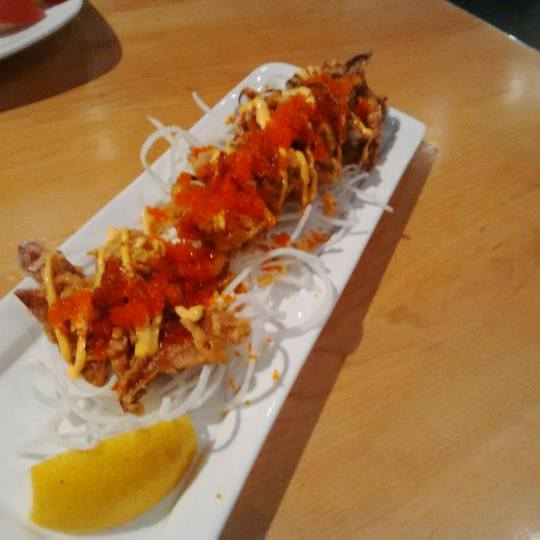 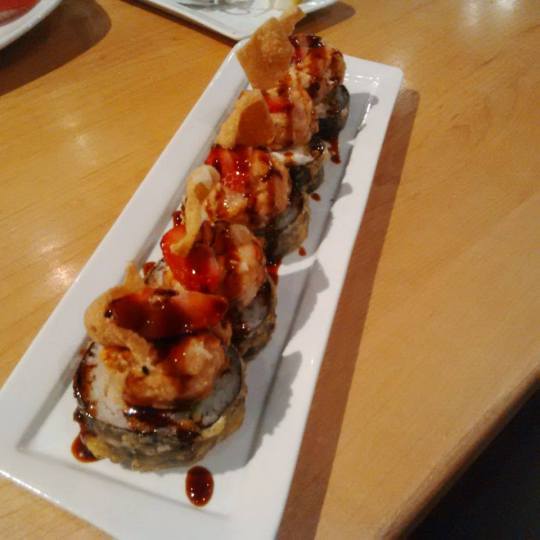 The Taste of Happiness

They always say
Never let your happiness depend on another
Do not let the environment determine your mood
That happiness is internal, that it originates from within you
That you alone control it