I confess, I am not familiar with Japanese BBQ. When greeted with the phrase “Japanese cuisine,” the first item that jumps into my mind is sushi, not BBQ. For me, BBQ conjures up images of either Korean BBQ or a Southern style one (or the kind using the BBQ lol). I mean, when my sister and I were in Vancouver with friends we went to a Korean and Japanese BBQ and had some similar dishes. To be honest, after today’s experience I’m still confused as to the difference between the two. Sure the seasonings are different, but they largely use the same cuts of meat and they are prepared in much the same way.

To go out with my sister after classes again was a refreshing change from the mundane routine of school and work. It was a bit of a walk from the station and we were told that there would be a half hour wait since we didn’t have a reservation. I was starved, but we had come all this way and Valerie had spoken so highly of it, I decided to just push through the hunger pangs to try this place. As it turns out, the wait was only 4 minutes.

We were promptly seated, presented menus, and asked for our drink order. After a quick perusal of the menu on the advice of Val and the waitress we decided on two appetizers and two lunch specials. The appetizers we ordered were the fried calamari and takoyaki. We both decided on the three BBQ item lunch special and ordered Harami Miso Skirt Steak, Beef Tongue, Kalbi Short Rib Sweet Soy, Bistro Hanger Steak Miso, Filet Mignon, and Spicy Pork. The lunch special came with rice, soup and salad. Val opted to have the seaweed soup and I, the Miso. The seaweed soup was a nice surprise since I had expected the flowy, hair like seaweed that I’m used to for Chinese seaweed soup. They used the same seaweed as in the Miso and the broth was slightly saltier. The salad was dressed with a tangier, more acidic salad dressing that I’m used to having at Japanese restaurants. It reminded me more of the salads that we got at Korean restaurants. I would’ve have liked to have more salad and I probably should’ve saved some to eat with the meal since the acid would’ve helped cut through the richness of the meat.

The appetizers arrived shortly after the soup and salad. The first piece of takoyaki I dug into had a good octopus to batter ratio. Unfortunately, that cannot be said of the subsequent pieces I had. Flavour wise, the interior was standard, but I felt as though there could have been a little more sauce to give the outside a little more of that characteristic takoyaki flavour. Of course there is a difference between a slight drizzle (or more than that) and dousing it in sauce; a good balance must be found. The calamari I found to be ordinary. Nothing sets it apart from other calamari I’ve had. It certain isn’t one of the best, but it isn’t the worst either.

Besides some of the meat having already been seasoned, each table is set with three sauces: ponzu, spicy, and sweet soy. Although the ponzu sauce isn’t bad, it just isn’t my favourite of the three due to its unique tanginess. My favourite of the three is the spicy one, which wasn’t even spicy, but it was very flavourful. I found that I often didn’t need to dip my meat into the sauces, but when I did it made the meat saltier and had me reaching for my white rice.

Overall, I had no complaints. The food was really good and I would definitely go back. One thing I will say is that while it doesn’t look like all that much, the meal was very filling.

Based on my experience today, I’d give this place a 4.0/5. Our server as well as another one who appeared to be in training were great in helping us out today. 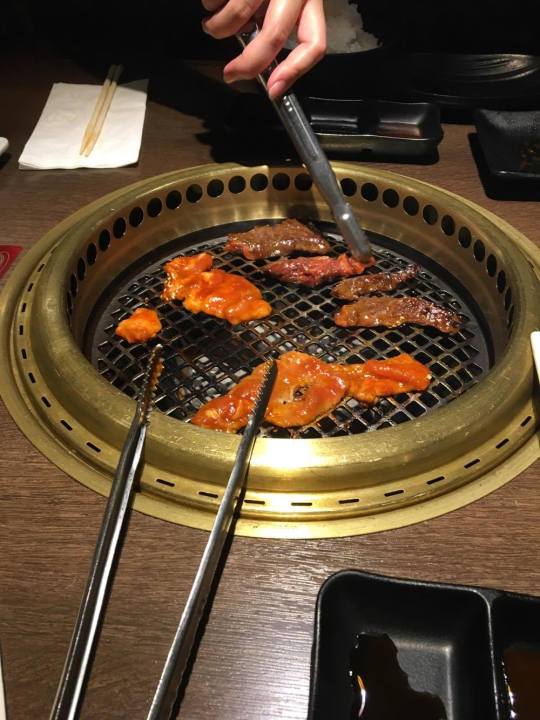