The first time I went to Higher Ground I was drawn in by their atmosphere and extensive menu. Though I didn’t order any food, the pot of lucky dragon green tea was cheap and great for sharing, but I can’t say that it was my one of my favourite teas. This cafe is very cozy and makes me feel right at home as a writer. I could spend hours just sitting there drinking tea and coffee and working away at my novel. And that is what I did today.

Today I returned there with my sister and cousin for lunch. I’ve, for some reason, taken it upon myself to try every caprese panini in the world. Although it isn’t called a caprese panini here, the mozzarella panini is essentially that: ball mozzarella, thick cut tomatoes, basil pesto and a balsamic dressing. This is one of the better paninis I’ve had and I think it’s absolutely brilliant that they decided to use pesto rather than whole basil leaves because the most frustrating thing is biting into the sandwich and having the entire leaf of basil come out into your mouth. It sounded so good that my sister ordered the exact same thing. The only thing that differed was our sides. Mine came with a butternut squash soup and hers came with a B.L.A.T. salad. Now you may think B.L.A.T., what’s that? Or what the heck is a B.L.A.T.?! But it is honest to goodness the best tasting salad ever! I would go back just to have that salad. Now everyone knows what a B.L.T. is, just add avocado to that. It is heaven paired with the lemon black pepper aioli. On the flip side, the butternut squash soup was a bit of a disappointment for me. I’ve had butternut squash soup at Vendome’s and that one is amazing. I enjoy that at Vendome’s there is a bit of cream added to increase the smoothness and richness of the soup, where as at Higher Ground there is a bit more acidity and unfortunately I had lumps of squash floating around in my soup. After the sandwiches we got two desserts. The first was a strawberry rhubarb pie. The piece was fairly large, but we had to ask them to warm it up twice and even then the pie wasn’t even warm. The second dessert looked somewhat like a tuxedo cake, but I’m not entirely sure, since I wasn’t the one who ordered it. That one was much better, though there really was a lot of cream. It was rich as chocolate cake should be and it left me wanting more.

In terms of drinks, we went through a lot in the five hours we were there (or at least that’s how it felt). We started with a Kyoto Cherry Green Tea. It was more fragrant than it tasted. Though it was very mild, it was a very good tea. Perhaps I’m not seasoned enough to discern the subtle notes of the tea, but it was hard to taste the cherry, in fact it was even hard to taste the green tea. After that we got an Irish Breakfast. I don’t know what I expected, but I didn’t expect it to taste so much like English Breakfast. We had about three pots of that before the tea became to diluted. My cousin got a cappuccino after that. It was pretty bitter and had a lot of foam. After she added in some honey I found it to be just right, while she thought it was way too sweet and my sister still found it too bitter.

I will definitely be returning here with friends or even just with my cousin again to work on my novel. It is just the perfect environment to get my creativity flowing.

The drinks are cheap as we can constantly get the teapot refilled, but food, especially the desserts are a bit on the expensive side. However, taking everything into consideration, I would not consider it a turn off.

I would rate it 4.5/5, vying for the top position of my favourite cafe with Vendome. 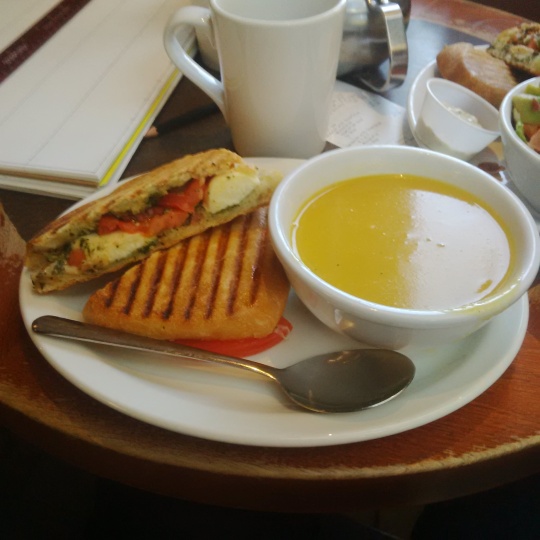 Mozzarella Panini with B.L.A.T. Salad and Lemon Pepper Aioli on the side