I’d like to start off by saying that Seanachie is part of a chain called Calgary’s Best Pubs which includes Dixon’s (Millrise), Kilkenny (Brentwood), Limericks (on Macleod Trail), and Joyce (Mission), which means that each of these locations have the same specials and share the same menus.

Each day of the week has a different special and we chose to go on Friday, which meant Fish and Chips.  Besides getting the special, Alex and I opted to order the Salt & Pepper Calamari and Pickle Spears.

When I hear “salt and pepper,” I automatically think about the Chinese dish where it’s salt and (chili and bell) pepper, so I was very interested in seeing their take on it.  When the dish came out, it looked like a normal calamari dish, so I guessed that the salt and pepper had already been mixed in the batter, although, that’s what I would normally assume batter is seasoned with, so that wasn’t anything really new or innovative.  The calamari was served with a tzatziki sauce and breaded and fried banana peppers.  I always love red onions, lemon, and banana peppers with my calamari because it provides a strong taste to cut through the heavy, deep fried calamari.  As is often the case with deep fried seafood is that I wish that there was one more lemon wedge to squeeze over the calamari because I could barely detect the lemon.  The Pickle Spears was more of a last minute craving.  The cider dill dip that accompanied the deep/flash fried pickle spears has got to be one of my favourite dips I’ve had to date.  It has all the creaminess I love in the dill dip from State & Main, but the cider makes the dip thinner and a little bit more ranch like in its consistency, but gives the dip some much needed acidity.  However, it isn’t overly sour (like a punch in the mouth), which is perfect for me since I do like a little bit of acidity, but I’m not at the level of eating a lemon.

The fish and chips was a little disappointing.  For starters, it looked a little sad all alone on the skewer (the two piece fish and chips looked a little less sad, but then it would have been too much food and I wouldn’t have been able to finish the fish. I was already struggling and I didn’t even finish my fries, which were also disappointing).  Again, there wasn’t enough lemon so I resorted to dumping way too much malt vinegar on my fish.  The acidity was fine, but even with the copious amount of vinegar I added, the batter still felt thick and greasy and I ended up removing it and just picking the fish out.  Of the fries I did have, the crunchy ones (naturally) were my favourite.  The tartar sauce was really good, but after so much deep fried food, I had to lay off on putting too much on my fish.  I usually dip my fries into the tartar sauce, but the rich on rich on rich from appetizer to entree was just too much and I ended up just dipping the fries in ketchup and unfortunately the remainder of the tartar sauce went to waste.  The “creamy coleslaw” was also super sad and somewhat of a disaster.  It definitely wasn’t creamy, but it wasn’t like the acidic coleslaw either.  It was something in between and really weird to me.  Hands down, Olly Fresco has some of the best non-restaurant coleslaw I’ve had.  The best restaurant coleslaw still has to be Tony Roma.

Overall, the appetizers were average, what you’d expect for pub food.  I was really craving deep fried pickles, so those felt like they were exceptionally good.  The entree didn’t really measure up.  But despite all that, I would be willing to give this chain another go.  I definitely want to try out their steak sandwich and their shrimp po’boy.

Service is what you’d expect from a pub.  The wait staff are a little more hands off, which allows patrons to chat a little more.  So obviously, don’t come here expecting to be in and out super fast (except maybe lunch service?), but they’re not super slow either.  In other words, I think that we had a good amount of attention from our waitress. 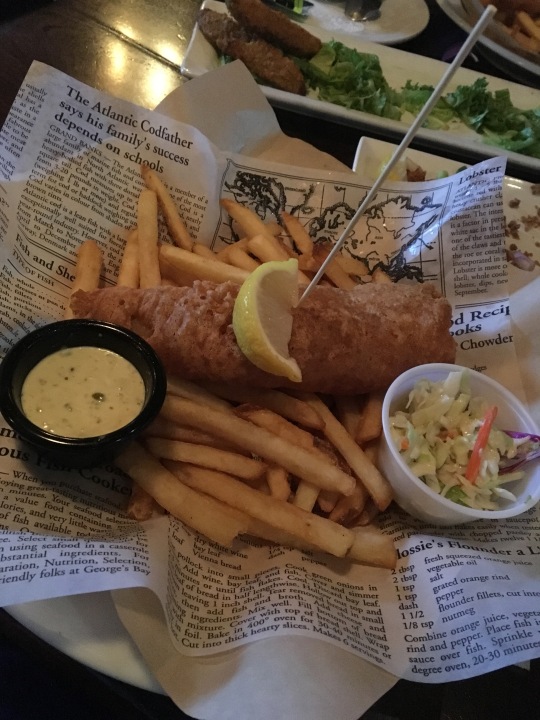 One Piece Fish and Chips