Day one, restaurant one. After being dropped off at the airport at 7:30 there was a lot of time to wait before our flight, so unsurprisingly, when we finally landed in Vancouver, everyone was starving. We looked up restaurants before we headed out, but decided that the best course of action was to go into the first appealing restaurant that we saw on our way to Granville Island. This was the restaurant we stumbled on.

As it was 2 in the afternoon, we decided to go with something light so that we could still have dinner at a reasonable time. We ordered the eight piece tuna and salmon sashimi, takoyaki, Energy Roll, and okonomiyaki. I didn’t have any sashimi, but my sister described it as being well chilled with no fishy taste for the tuna and that the slabs were sufficiently thick. The takoyaki is comparable to the one served at Sakana Grill. It too is served with a generous helping of fish flakes on top. However, I’d recommend these ones over the Sakana ones simply because it had a crunchier exterior, which I enjoyed immensely. The okonomiyaki batter is pretty much the same as the takoyaki except that it has onion and is flattened out into a pancake shape. This one was a bit of a disappointment as it was most unlike the picture that was printed in the menu. The menu promised a large pancake not unlike a Korean pancake in Korean BBQ. The first few bites were really enjoyable, but the sauce to pancake ratio was a bit off and there wasn’t enough sauce to go with all the pancake. The Energy Roll was essentially a dynamite roll with fried unagi on top, dressed with spicy mayo and unagi sauce. This roll is one of my favourites to date and this is the first time I’ve tried fried unagi (unagi in tempura batter and deep fried).

Since it was so late, there were few patrons, but when we walked by around 7 pm, they were packed, which is always a good indication. Service was a bit lacking, but again, because of the late hour this was technically their lunch time. Having taken everything into consideration, I’d say that my experience here was pretty good and that I would recommend this place. I would give this restaurant a 3.75/5. 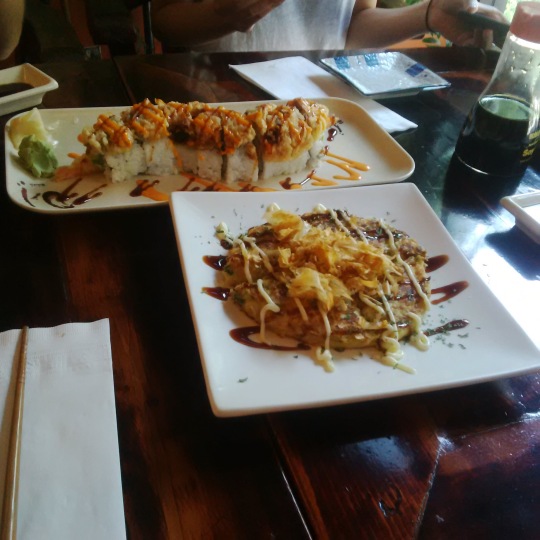