This is one of the sushi places that our family returns to time after time. Not only is the food reasonably priced, but it’s also good. They are constantly introducing new items to their menus to keep it fresh and up-to-date. Today for example, there were about 6 new dishes added to the menu, with about that many being discontinued. What I enjoy most about sushi boat is their boats (hence their name). Styled like a self-serve tapas bar, different coloured plates float past you showcasing a few of their popular plates. Of course if you don’t see what you like you can always order from one of the many waitresses hovering by waiting to help.

The spicy tuna is the pretty much one of the only dishes in which I’m able to eat raw fish. Typically I go with salmon because it has a firmer texture and doesn’t feel like I’m eating raw mush, but the spicy mayo sauce atop the spicy tuna rolls makes it one of my favourites. Uni is an acquired taste. It has a very unique taste that is very clearly seafoody, but the fishiness is not the same as the taste of when seafood goes bad, rather it is a pure, crystalline taste, if that makes any sense. In addition to its pure taste it is rich and smooth, but not creamy. My sister originally hated it, but with time she came to love it. The four plates of creamy scallops was a bit of a mistake. We had intended to order four pieces (two orders) not four plates. However, this is my sister’s all time favourite, so I guess it wasn’t so bad. I tried this dish again today but can’t see why she would like it that much. The scallops don’t have much taste, but the crunch of the tobiko provides a nice contrast to the soft, slimy, mayo coated scallops. Toro is tuna belly and due to the fat marbling, it is one of the most delicious pieces. It is so tender and the melt in your mouth quality of this cut of fish has made it one of the staples when we go to this restaurant. Another staple is the seared salmon.It’s not bad, but it’s another of my sister’s favourites. She doesn’t even know why she likes it but she does. However, in recent times she has been disappointed because they used to sear the salmon and then top it with a thin line of mayo, but now they sear it with the mayo on top leaving it a messy, melty blob of unappealingness. The Hawaiian Poke is one of their new items, so we decided to give it a try. Upon lifting off the lid, we were greeted with the delightful aromatic scent of sesame oil. This was my first time I have had a poke and it was delicious. If you’ve read my other reviews, I don’t handle my raw fish well, but now I’m happy to say that I can add this to my repertoire of raw fish. Unagi….where do I start with this one. Best. Thing. Ever. It’s fresh water eel, grilled and coated in a sticky, sweet, teriyaki sauce. Usually we have unagi as a nigiri, but sometimes we have it in a roll or on top of rice, all of which are delicious. The salmon nigiri was also for my sister. Her advice when choosing a piece is to look for a piece with consistent marbling. Of course it’s important to also check the cut (was it shredded or nicely sliced) as well as the thickness. Obviously, a thicker cut is more expensive, but when you’re getting a piece of nigiri, they are all the same price (if they’re on the same coloured plate) and the chef who prepared it may have made it slightly thicker, so be on the look out for that. The gyoza and korokke were primarily for me and I would have grabbed the calamari if I wasn’t already as full as I was by this point in the meal. The gyoza had an excellently crisped exterior and had just the right amount of sweet and spicy sauce drizzled on it. This is my first time trying korokke. I’ve had it in a roll before, but I’ve never had a whole piece. It was served with BBQ sauce on the side to help cut through the greasiness of the fried potato, but I didn’t used all that much because it felt strange to have BBQ sauce with Japanese food. The tanginess of the BBQ sauce did help a little though, so I can understand why it was served alongside the korokke. Korokke is a borrowed word; it comes from the French word croquette. As always, we round out our meal with a dessert and I really love their green tea ice cream. It’s nothing like Sakana’s, but for the price we’re paying it’s good.

Sometimes the waitresses need to be flagged down, but otherwise they are pretty attentive and service is good. Based on price and taste I would certainly return and recommend this place to everyone and anyone (especially if you enjoy sushi). I would rate this place a 4/5. 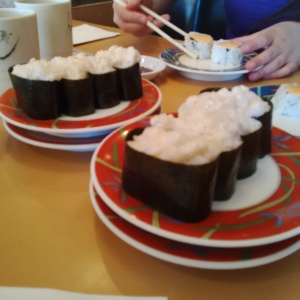 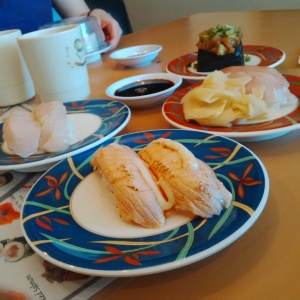 Unagi with a piece of salmon nigiri behind