This evening I returned to Joey’s Crowfoot to share a meal with my best friend before she leaves the city for Vancouver. The first time I was here was with my cousin for my eighteenth birthday and I don’t quite remember what I had, except that the starter was a Ahi Tuna Taco with Wasabi aioli. The second time I went to the Eau Claire location with my cousin and best friend for my birthday. Both my cousin and best friend ordered the lobster grilled cheese while I got the Butter Chicken. I really enjoyed the naan and butter chicken, but the strange crunchy thing and the basmati rice was okay. There was nothing actually wrong with the rice, it was made as it should be, but I just prefer naan over rice.

Tonight we decided to go all out: appetizer, main, and dessert. We started with the pesto shrimp flatbread. It was different, a nice different since we are always getting calamari because of me. This time I let her decide and it was really a good choice. The flatbread was nice and crunchy around the edges, the cheese wonderfully stringy, and it was topped with fresh basil and a chipotle aioli that gave it a nice kick. The only thing I could say I disliked about the flatbread was the chunks of sundried tomatoes. As I’m already not a huge fan of sundried tomatoes, I felt their presence was unnecessary and didn’t bring an extra flavour profile to the dish.

For our mains, my best friend ordered the Sashimi Tuna Salad. Now the last time we went for sushi, sashimi wasn’t one of her favourites, so it surprised me when she ordered it and it surprised me even more when she said that she had enjoyed it despite not enjoying the sashimi we had at Sakana Grill. The salad is unlike any I’ve seen on menus elsewhere. I mean, how often do you find a salad of seared rare Ahi, mango, peanuts, avocado, and crispy noodles with a cilantro ginger dressing. She described the salad as being “well balanced, has some sweetness, but also nice flavours of the cilantro and garlic olive oil dressing” come through on the palate. All in all the tuna was a good pairing and “it had just the right amount of noodles, just the right amount of everything really.”

I ordered the steak and sushi at the recommendation of a coworker. It was essentially a Japanese surf & turf, tataki style CAB® PRIME steak, with Ponzu sauce, and rainbow roll. The rainbow roll consists of Ahi tuna, salmon, crab, avocado, sriracha aioli. She wasn’t kidding, this was amazing. This is the only time I will ever eat raw fish. I absolutely can’t stand sashimi, but I was totally fine with it on the rainbow roll. The contrast between the steak and the sushi was absolutely delicious. However, as I’m used to having Japanese sushi, the rolls were a little squished and not really filled with much. Naturally I didn’t touch the ginger or wasabi but it wasn’t like they gave me soy sauce to dip it in, not that I minded as I was busy wiping up the sriracha aioli off the plate with the rolls. There wasn’t really any heat from the sriracha aioli, but it was delicious nonetheless. The steak was so tender and flavourful that I wanted to eat another whole steak.

For dessert we both got the molten lava chocolate souffle. It was not as I thought a souffle ought to have been. For one, it looked more like a molten lava cake rather than a souffle and I’m pretty sure, though I’ve never had a souffle I’m sure the bottom isn’t supposed to be crunch and near impossible to cut through with a spoon without sending something semi-flying across my plate, but I loved the contrast of the whole dish: warmth of the molten cake and the cold of the vanilla ice cream, the sweet of the ice cream and cake contrasted to the tartness of the raspberries and raspberry compote.

Overall the food here is amazing, however the price is a completely different story. The service is much better than a lot of places I’ve been to. Our server was ultra helpful and incredibly accommodating to our needs.  Taking everything into consideration I would rate this place 4/5 primarily because my wallet would greatly suffer if I went there frequently. 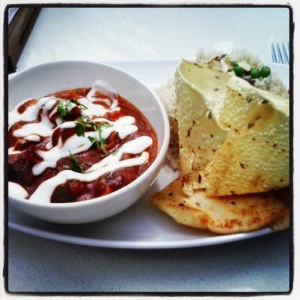 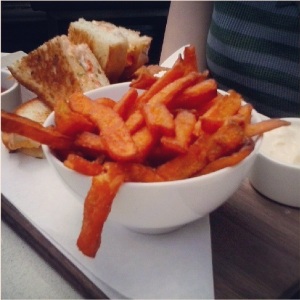 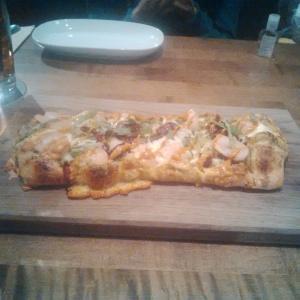 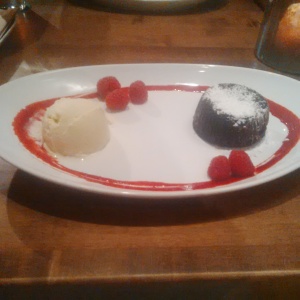 More complicated than that